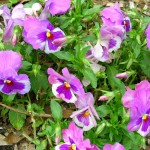 Flavonoids are a diverse group of over 4000 aromatic plant compound responsible for many of the purple, red and blue colours in plants. These pigments are thought to play a variety of roles in plants including attraction of insects for pollination, signalling between microbes and plants, in defence as antimicrobial agents, as protection from ultra violet light, in attraction of seed dispersers and as feeding deterrents to higher animals. Aside from their role as pigments, their health benefits to humans, when consumed regularly in the diet, has attracted much attention in recent years. Studies have shown that flavonoids act as antioxidants in vitro, although their scavenging effects on free radicals in humans is controversial. Evidence also suggests that flavonoids can act as gene regulators, based on both human and animal studies. Epidemiological studies show inverse associations between some groups of flavonoids and some diseases such as cardiovascular disease and cancer. Early advances in floral genetics were based on the ease of screening for colour changes in plants thanks largely to their flavonoid derived pigmentation.