Protein derives from the Greek word proteos, meaning primary, which highlights the importance of protein to life. Proteins are complex folded molecule that are described by their secondary, tertiary and quaternary structure. However, it is the primary structure of proteins that is dictated by the sequence of amino acids that form the polypeptide chain. There are 20 amino acids utilised by humans in the construction of a protein’s primary structure, but not all of these can be synthesised in the body. A number of amino acids must be supplied by the diet as no synthetic pathway for their construction exists in humans, and as such they are essential nutrients. In the 1950s, Rose1-5 classified eight of the amino acids as essential to humans. These were leucine, isoleucine, valine, methionine, threonine, phenylalanine, tryptophan and lysine.

The value of the work performed by Rose cannot be understated. However since this time, important findings and advances in nutritional sciences have further elucidated the role of amino acids in human metabolisms. Originally Rose concluded that histidine was not essential to humans. However, more recent evidence from a longer-term study6 has demonstrated it is essential in healthy adult humans. Subsequently, findings have highlighted that further to the nine essential amino acids, under certain conditions other amino acids can become essential. For example, tyrosine and cysteine are synthesised from phenylalanine and methionine, respectively. If there is a dietary deficiency of either methionine or phenylalanine, both cysteine and tyrosine become conditionally essential. In addition, premature infants have an inability to synthesise enough arginine for growth, and so this too can become conditionally essential.

Amino acids have the same basic structure that comprises of an amino group (-NH2) and carboxyl group (-COOH) linked to a central α-carbon. The difference between the various amino acids is derived from the variable group attached to the α-carbon (-R). Glycine and alanine have the simplest amino acid structures as their variable groups are a hydrogen atom and methyl group, respectively. However. other amino acids can have quite elaborate side groups which can include branched structure (valine, isoleucine, leucine) and aromatic rings (tyrosine, tryptophan and phenylalanine). The side chain gives the amino acids differing chemical properties based on the nature of the groups and this can allow the classification of amino acids based on polarity, charge or size.  Figure 1 shows the generic structure of an amino acid.

Figure 1. The basic structure of an amino acid showing the location of the variable group (-R). Amino acids with no amino groups or carboxyl groups in their variable group can form a zwitterion at neutral pH.  Because their side chains are not charged, zwitterions have no net electrical charge and are therefore classed as neutral amino acids (note the charge on the carboxyl group is delocalised between the oxygen atoms). The neutral amino acids are alanine, asparagine, cysteine, glutamine, glycine, isoleucine, leucine, methionine, phenylalanine, proline, serine, threonine, tryptophan, tyrosine and valine. The addition of additional amino or carboxyl groups to the variable group produces a net positive or negative charge, respectively. Negatively charged amino acids are aspartic acid and glutamine acid. Positively charged amino acids are arginine, histidine and lysine.

The catabolism of amino acids is important because once the constituent amino groups have been removed, the carbon skeleton of the amino acids can feed into a variety of pathways to provide a respiratory fuel for the generation of ATP, or can be converted to glycogen or triglycerides for storage prior to energy metabolism. The removal of the nitrogen group from amino acids can occur by transamination to a 2-oxo-acid (α-keto acid, usually α-ketoglutarate) forming a new amino acid (usually glutamate) and a new 2-oxo-acid. Alternatively the nitrogen group can be deaminated by removal to form ammonia, with no new formation of an amino acid. The remaining 2-oxo-acids, then feed into the metabolic pathways and can be classified as ketogenic or glucogenic, depending on whether the compound is converted to a ketone body or glucose, respectively. Some amino acids are both ketogenic and glucogenic. (figure 2). 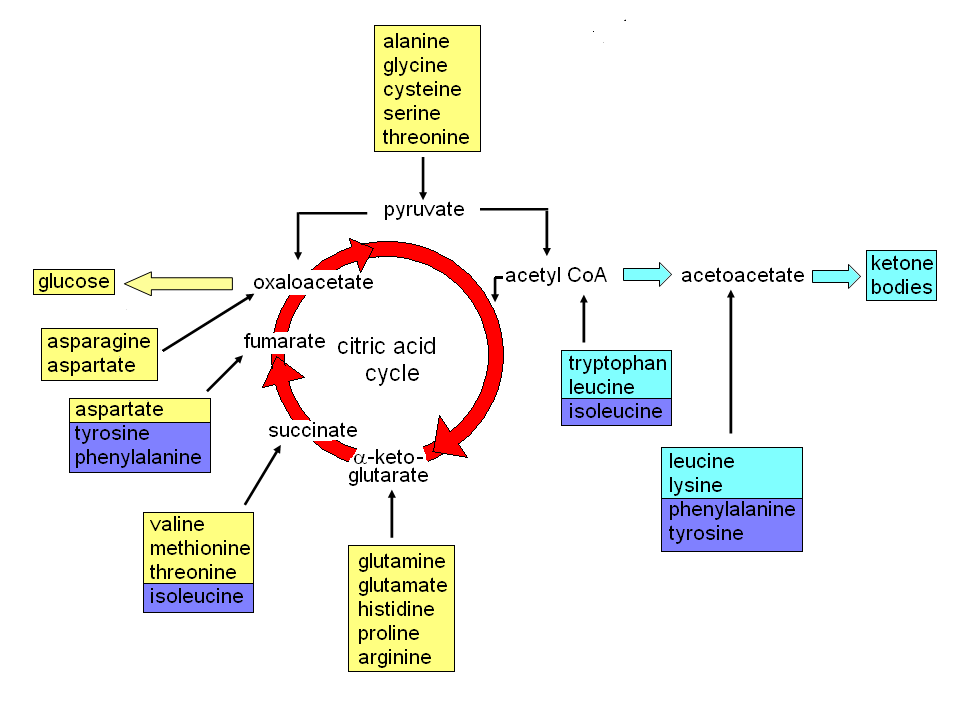