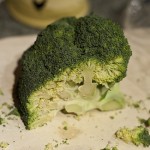 Chemically, polyphenols contains a hydroxyl (OH) group attached to a benzene ring. Several thousand natural polyphenols have been identified in plants, where they serve important functions as biosynthetic precursors, absorb ultraviolet radiation and may attract pollinating insects. When ingested from dietary plants, polyphenols may act as reducing agents in humans, where they protect the tissues of the body against oxidative stress. Tocopherols and tocotrienols (vitamin E) are one group of polyphenols that are perhaps the best recognised by the general public in terms of their health benefits. Tocopherols and tocotrienols exert powerful antioxidant effects in vitro and in vivo, inhibiting lipid peroxidation by acting as chain breaking peroxyl radical scavengers. Tocopherols and tocotrienols inhibit lipid peroxidation largely because they scavenge lipid peroxyl radicals much faster than these radicals can react with adjacent fatty acid side chains or with membrane proteins in biological systems. There is good evidence that the dietary polyphenols are not only absorbed but are also metabolised and distributed in mammalian tissue1.

The main sources of polyphenols in the human diet are fruit and beverages (fruit juice, wine, tea, coffee, beer and chocolate)2. Plant polyphenols can be defined through the nature of their carbon skeleton as phenolic acids, flavonoids and the less common stilbenes and lignans. Phenolic acids are abundant in foods, the most frequently encountered being caffeic acid and ferulic acid. Stilbenes are not widespread in foods of plant origin, nevertheless, resveratrol has received attention for its anticarcinogenic properties because it is a major constituent of red wine. The only food to contain considerable quantities of lignans is the flax plant within its seeds. These lignans are metabolised in the human gut to compounds that show oestrogenic agonist and antagonist properties. The flavonoids are the most abundant polyphenols in our diets and because of this, along with their widespread nature in a large number of foods, have been the object of much interest in the research in terms of their health benefits to humans. Evidence supports a role for flavonoids in the prevention of both cancer and cardiovascular disease.