In 1969, Kilmer McCully published his seminal paper on the homocysteine theory of cardiovascular disease. McCully reported on the vascular pathologies seen in a number of his patients with homocysteinurea, a rare genetic disorder characterised by elevated plasma levels of homocysteine. McCully realised that the elevated levels of homocysteine were caused by a genetic defect that resulted in reduced expression and activity in the cystathionine β-synthase enzyme. This enzyme normally converts homocysteine to cystathionine. However, a deficiency of the enzyme causes cellular homocysteine concentrations to rise, which in turn elevates plasma levels of homocysteine. The homocysteine then damages arterial linings through an unknown mechanism leading to atherosclerosis. The resulting atherosclerotic plaques predispose homocysteinurea sufferers to premature deaths by cardiovascular disease. None of this was particularly ground breaking research in itself, but McCully took the concept a step further, in a brilliant piece of deductive reasoning.

McCully theorised that cardiovascular disease in otherwise healthy individuals might be caused by a deficiency of cystathionine β-synthase leading to elevated plasma homocysteine levels. He realised that a genetic defect in the enzyme could not be the mechanism that elevated homocysteine levels. Instead, McCully suggested that pyridoxal phosphate (vitamin B6) deficiency might raise plasma homocysteine because it is required as a co-factor by the enzyme. His evidence came from experiments showing atherosclerotic lesions in pyridoxal phosphate deficient monkeys. Deficiency of pyridoxal phosphate may therefore cause reduced activity of the cystathionine β-synthase enzyme in humans. Evidence showing an increased excretion of cystathionine in humans and rats following pyridoxal deficiency supported his theory. McCully later expanded his theory to include cobalamin (vitamin B12) and folic acid deficiencies as causative factors, based on these vitamins being required for conversion of homocysteine to methionine (figure 1). 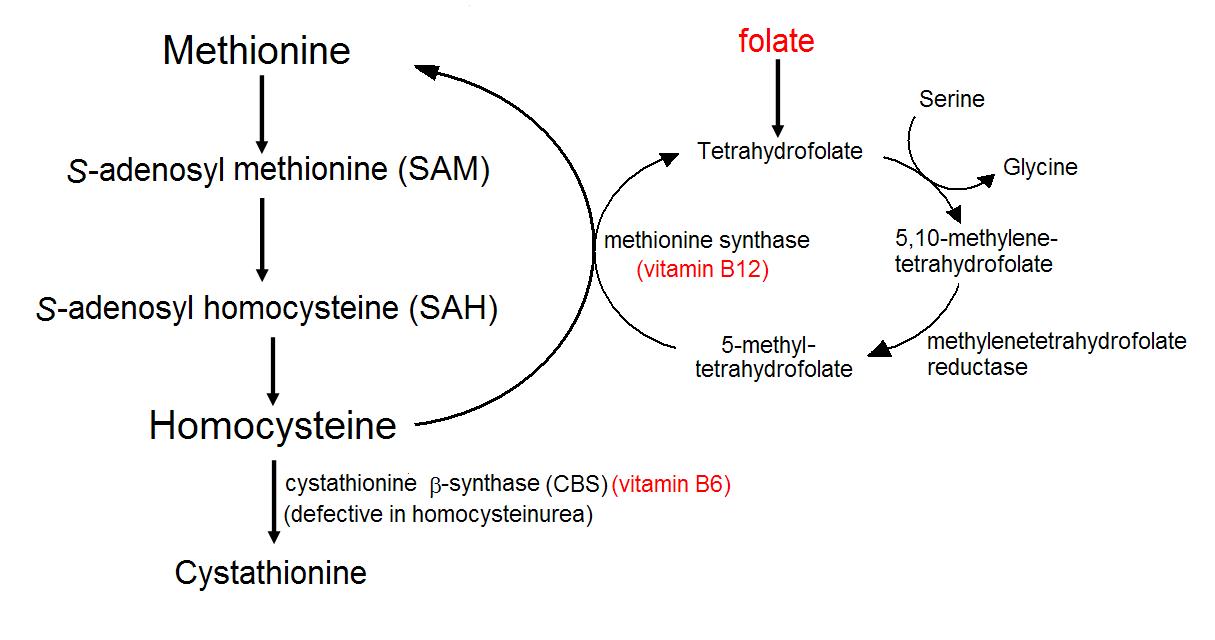 Figure 1. The pathway for the metabolism of homocysteine in humans showing the location of the defective enzyme in homocysteinurea (cystathionine β-synthase; CBS) and the three B vitamins required for pathway flux (pyridoxal phosphate, folate and cobalamin).

Despite substantial supporting evidence, McCully’s theory was largely ignored. More sinisterly, McCully had his funding withdrawn and he was moved to an inferior laboratory. Other researchers criticised his work and used ad hominem attacks to discredit the theory. McCully was unable to obtain further funding from the National Institutes of Health and eventually had to abandon his research. This was largely politically motivated and resulted from the substantial amounts of money being invested in the cholesterol theory of cardiovascular disease. However, McCully would get the last laugh. The nutritional sciences have now all but demolished the disastrous diet heart hypothesis of cardiovascular disease, and elevated plasma homocysteine is now widely recognised as an independent risk factor for cardiovascular disease, caused by deficiencies of pyridoxal phosphate, cobalamin or folic acid. Numerous papers support McCully’s finding and McCully is widely considered a genius ahead of his time.