Garlic: Can It Improve Body Composition? 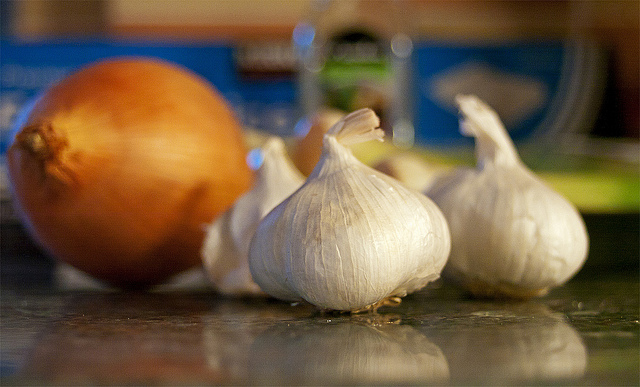 Garlic may improve body composition because of the saponins it contains.

Garlic is a superfood which has been shown over the years to possess a myriad of health benefits. Long term consumption of garlic may have benefits such as reducing the incidence of various cancers and decreasing rates of heart disease. These long term effects of garlic have been extensively covered in the media and anecdotal evidence backs up the volumous research. However there are some other less well known effects that are possibly worthy of mention. For example, could garlic consumption boost testosterone and improve body composition? Well possibly, according to a study published in the Journal of Nutrition in 20011. Researchers found that rats fed a high protein diet in combination with garlic powder had higher levels of testicular testosterone when compared to control animals which were fed just the high protein diet.

The researchers also discovered that the rats fed garlic had lower levels of plasma corticosterone irrespective of a high or low protein diet. A breakdown product of testosterone called 17-ketosteroid was also elevated in rats fed the high protein diet and garlic combination suggesting higher levels of male sex hormones in these rats. The researchers also reported that the rats fed the high protein and garlic combination had improved nitrogen retention, which could lead to muscular growth. The high protein diets were around 40 % protein, and garlic supplementation was 8 grams of garlic powder per kg of food. In a follow up experiment, the researchers from Japan fed the animals a sulphur containing compound from garlic called diallyldisulfide, and found that plasma luteinising hormone concentration increased in a dose dependent manner.

These studies suggest that compounds in garlic are able to raise luteinising hormone levels which may in turn raise testosterone, lower corticosterone, and improve nitrogen retention. Improved nitrogen retention can lead to muscular growth and so it is possible that garlic supplementation could lead to improvements in body composition if taken over the long term. The same group of researchers also published a paper in the Journal of Nutrition 19992 suggesting that a diet rich in garlic may cause an increase in thermogenesis and fat loss by increases in adrenaline and noradrenaline levels in rats. In combination it appears that if these effects could translate over to human subjects, addition of garlic to the diet may aid in the addition of lean mass and a reduction in fat. However, rats are not humans and so caution should be exercised when trying to extrapolate these results.