Eicosapentanoic acid (EPA, C20:5 (n-3)) and docosahexanoic acid (DHA, C22:6 (n-3)) are precursors to a number of important signal molecules that are required for cell function. These long-chain fatty acids accumulate in cell membranes and are then used by the cells to regulate inflammatory and immune responses. Both EPA and DHA can be synthesised in humans from the essential fatty acid α-linolenic acid (ALA, C18:3 (n-3)) (figure 1), a long chain fatty acid that is produced in plants from linoleic acid (LA, C18:2 (n-6)). However, the conversion is poor due to the low activity of the rate limiting Δ6-desturase enzyme. As a result, consumption of ALA does not increase levels of EPA and DHA in cell membranes to the same extent as dietary EPA and DHA. In addition, high levels of dietary LA compete with ALA for the Δ6-desturase enzyme further reducing EPA and DHA synthesis. 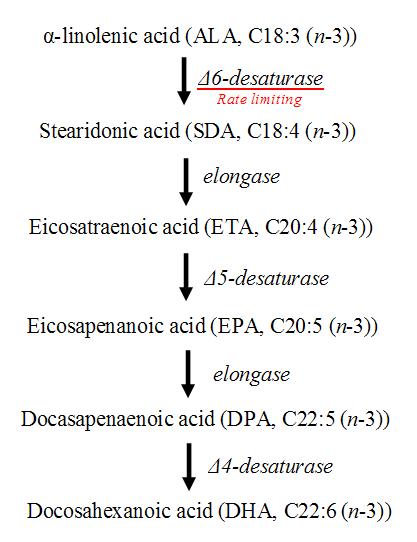 Figure 1. The n-3 fatty acid pathway. The rate limiting step is the conversion of ALA to SDA, a reaction catalysed by the enzyme Δ6-desaturase.

The fact that Δ6-desturase is rate limiting, prevents ALA being used therapeutically to treat inflammatory or immune related disorders. This is evidenced by studies showing little change in plasma membrane levels of EPA and DHA following ALA supplementation. Further, ALA supplementation has minimal effect on cardiovascular biomarkers when compared to both EPA and DHA. Dietary ALA is also reluctant to accumulate in cell membranes. The fact that dietary ALA is preferentially oxidised rather than be converted to longer more unsaturated metabolites is perplexing and has not been adequately explained in the literature. However, other fatty acids within the n-3 essential fatty acid pathway are present in commonly eaten foods. That these can feed into the pathway past the rate limiting Δ6-desturase step has resulted in the suggestion that they may be beneficial in raising cell membrane levels of EPA and DHA.

One such fatty acid that may be beneficial at increasing EPA and DHA membrane concentrations is stearidonic acid (SDA, C18:4 (n-3)). The benefit of dietary SDA comes from the fact that it bypasses the rate limiting Δ6-desturase enzyme and as such may be a better precursor molecule for the formation of EPA and DHA. In fact research supports this contention. For example, researchers1 have investigated the effects of SDA consumption in healthy men and women. Over a 12 week period, SDA was beneficial in enriching red blood cell (RBC) membranes with EPA. Compared to a control (safflower oil), both EPA and SDA increased RBC membranes significantly. However, EPA was more efficient at raising RBC membrane levels of EPA compared to SDA. The authors calculated that 0.61, 1.89 and 5.32 g/d SDA would be required to raised RBC plasma levels of EPA to the same extent as 0.25, 0.50 and 0.89 g/d EPA.

The relative efficiencies of SDA to raise RBC concentrations of EPA therefore appear to vary from around 15 to 40 % depending on the intake, with lower intakes having more efficient conversion rates. Like EPA and DHA, SDA is present in sea foods but in much lower concentrations (~0.5 to 2 % of total fatty acids in fish compared to 15 to 20 % EPA and DHA). However, mackerel have high (~7 % ) SDA concentrations. At first inspection SDA supplementation may seem pointless when compared to EPA and DHA. However, SDA is available in some foods of plant origin, such as seaweed, with Undaria pinnatifida (wakame) containing around 0.7 to 1.9 mg/g dry weight as SDA. This makes it a viable alternative to EPA and DHA for vegetarians. In addition, because SDA is more saturated than EPA and DHA, it may have a greater stability and therefore be more appealing to manufacturers because of its improved shelf-life