Annona is a group of plants belonging to the Annonaceae family. A number of species from this group have been shown to have central nervous system effects and may have mood elevating properties. Studies with animals have shown that Annonaceae plants have a number of effects including tranquilising, anti-anxiety and anticonvulsant effects. Alkaloids from Annonaceae plants may have an affinity for the serotonin 5-HT1A receptor and thus modulate dopamine release. Dopamine release is also modulated by the tricyclic antidepressant drugs class, and this may suggest that Annonaceae plants may have antidepressant effects. For example, in one study, researchers administered Annona cherimola to mice and exposed them to experimental stress. Annona cherimola was significantly able to increase the time the mice took to failure on the forced swimming test, indicative of antidepressant effects. Increased dopamine turnover was also observed in the mice administered Annona cherimola extracts. 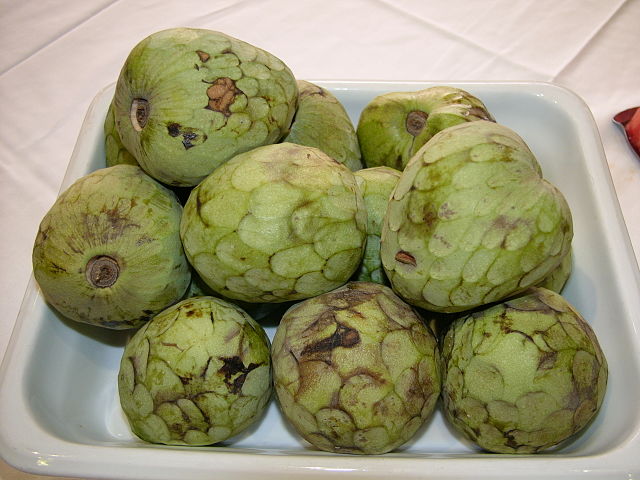 It is not fully understood how the Annonaceae group of plants are able to exert their mood elevating properties, but one theory is that components of the plants, probably alkaloids, interact with the serotonergic 5-HT1A receptors and may modulate dopaminergic neurotransmission in the central nervous system of animals. Another possibility is that components of the plants interact with the GABA system, causing relaxation through reduced electrical activity in the brain. Species in the Annonaceae group that may show similar mood elevating effects include Annona diversifolia, Annona muricata and Annona cherimola. In Annona cherimola, some of the main alkaloids are anonaine, liriodenine, and nornuciferine. Image is Annona cherimola fruit. Image from: By Hannes Grobe 21:22, 5 November 2006 (UTC) – Own work, CC BY-SA 2.5, https://commons.wikimedia.org/w/index.php?curid=1343754.

Martínez-Vázqueza, M., Estrada-Reyesb, R., Escalonab, A. A., Velázquezb, I. L., Martínez-Motac, L., Morenod, J. and Heinzee, G. 2012. Antidepressant-like effects of an alkaloid extract of the aerial parts of Annona cherimola in mice. Journal of Ethnopharmacology, 139, 164-170

Robert Barrington is a writer, nutritionist, lecturer and philosopher.
View all posts by Robert Barrington →
This entry was posted in Annona cherimola (Cherimoya), Anxiety, Depression, Mood. Bookmark the permalink.