The diets of populations change over time as factors such as the environment, geographical location and traditions show variation with time. The advent of agriculture and the creation of urban centre heralded advances in food technology that culminated in the modern agricultural revolution in England in the 17th Century. Comparisons between the diets of modern Western civilisation and ancient civilisations are fairly accurate because archaeological evidence is fairly strong over this time period. In addition, civilisations such as the Sumerians, Egyptians, Greeks and Romans kept extensive records regarding trade and agriculture. However, the information regarding the diets of populations who lived prior to the major known civilisations are less well understood. Despite the scant evidence, a picture emerges from archaeological finds suggesting that Palaeolithic man had a diet that is very different to the one consumed in contemporary Western nations (figure 1). 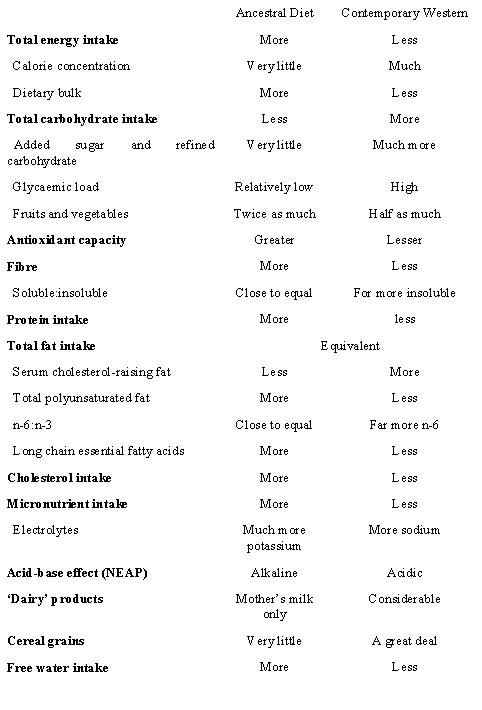 Comparisons of the supposed ancestral diet to the modern Western diet is often used to create models for disease prevention recommendation. This is based on the assumption that our ancestral diet is our ‘natural diet’. While this has some merits, it falls down by the fact that diseases of modern Western man are not common amongst post-agricultural civilisations that did not consume this ancestral diet. In fact cancer, cardiovascular disease and obesity do not appear to be present in modern native populations until refined white flour, alcohol and refined sugar are introduced to their diets, in many cases by Western explorers. The diseases of native populations not exposed to the high calorie, high protein, highly refined diets of Western nations tends to be infectious disease, mainly of the respiratory tract. This is illustrated nicely by investigating the diets of those living in poorer regions of the World today (here).

Recent advances in nutritional science are highlighting some key areas of dietary intakes that may be responsible for modern Western diseases. It appears that modern food intakes are very deficient in n-3 fatty acids but instead high in n-6 fatty acids. A myriad of research is now showing that increasing the n-3:n-6 fatty acid ratio in the diet can protect from cardiovascular disease, cancer, diabetes and obesity. Modern farming methods are depleting the soils of essential minerals and producing mineral deficient crops. When human populations eat those crops they too become mineral deficient. Many research studies have measured mineral levels in free living Western individuals and found evidence of multiple mineral and vitamin deficiencies.  Commonly deficient minerals include magnesium, zinc and chromium. Multiple vitamin deficiencies are often found in the poor and the elderly in Western populations.

Other research looking at the net endogenous acid production of foods in the body suggests that high acid producing diets contribute to modern diseases, particularly of the skeleton. Modern diets with high intakes of grains, dairy and meat produce a high acid load on the body. Ancient diets tended to contain more fruits and vegetables with ample potassium, which alkalinised the blood. The very high levels of osteoporosis found in  native Inuit population remains, coupled with their almost total lack of plant based foods, is evidence for the damaging effects of acidified blood. Vitamin D levels in ancient man were almost certainly higher than modern man because of lifestyle factors. Sun exposure has likely fallen due to increased time spent indoors, and other factors such as sun cream use and the covering of more skin with clothes. This vitamin D insufficiency is being identified as a key contributor to modern disease.