The Anticancer Effects of Garlic

Posted on August 1, 2017 by Robert Barrington

A number of vegetables have been shown to affect immunity and detoxification, and these effects may give them particular anticancer effects. The anticancer effects of certain vegetables relates to the phytochemicals contained within the tissues of the plant, many of which are bioavailable in humans. Garlic (Allium sativum L.) has been shown to possess many health effects and the majority of studies have concentrated on the beneficial cardiovascular effects of garlic. However, a number of studies show that regular consumption of garlic may provide specific anticancer effects. Cell studies show that garlic extracts can cause a number of cellular effects that may explain the anticancer effects of garlic including the ability to induce apoptosis, create cell cycle arrest and inhibit angiogenesis. Epidemiology studies such as the Iowa Women’s Health Study have shown weak inverse associations between garlic (and onion) intake and the risk of certain types of cancer (gastric cancer in the case of Iowa study).

Evidence from human clinical studies on the anticancer effects of garlic are limited, but a number of studies have investigated these effects. In one study, researchers conducted a randomised crossover trials involving healthy volunteers. A single meal containing 100 g white bread, 15 g butter with 5 g raw crushed garlic was administered to the volunteers. At another time the volunteers were administered the same meal but without garlic. The researchers then measured the expression of a number of genes in white blood cells to see if expression differed from pre-meal baseline levels. Following garlic consumption, the researchers found increases in the aryl hydrocarbon receptor, aryl hydrocarbon receptor nuclear translocator, hypoxia-inducible factor 1a, proto-oncogene c-Jun, nuclear factor of activated T cells activating protein with immunoreceptor tyrosine-based activation motif 1, oncostatin M, and V-rel avian reticuloendotheliosis viral oncogene homolog. 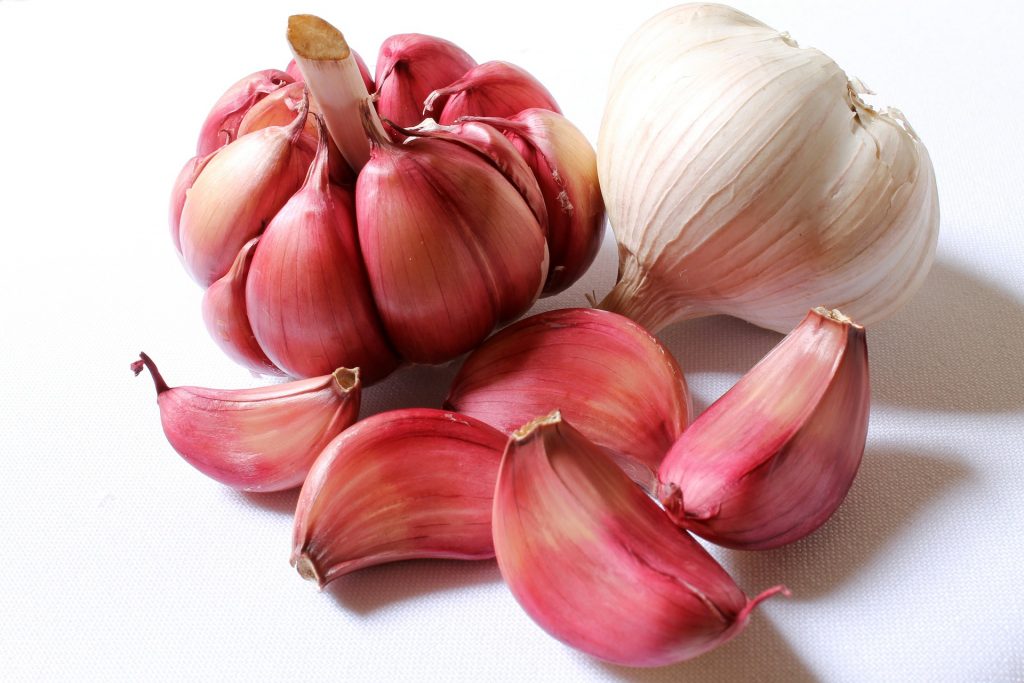 Garlic may have particular anticancer effects in humans and other animals. This may relate to the volatile sulphur chemicals that are released upon crushing of the garlic. Raw garlic has been shown to upregulate expression of genes involved in apoptosis, immunity and xenobiotic metabolism after a single garlic containing meal.

These results indicated that the expression of a number of genes that may be involved in apoptosis, immunity and xenobiotic metabolism may be unpregulated by garlic in humans. What is more interesting is that this effect was seen after a single meal containing garlic. Cell culture experiments confirmed in cell models that four of the genes were also upregulated following administration of garlic (aryl hydrocarbon receptor nuclear translocator, oncostatin M, proto-oncogene c-Jun, V-rel avian reticuloendotheliosis viral oncogene homolog and hypoxia-inducible factor 1a). Based on studies to date involving both cell culture and epidemiological data, it might be expected that a number of other vegetables from the same family as garlic may share this anticancer effect. However, this is yet to be tested and would be a good area of study for future research in this area. It would also be interesting to investigate the effects of cooking on the anticancer effects of garlic.