Rhodiola rosea is an adaptogenic herb that is indigenous to the mountainous regions of the arctic circle. A number of benefits have been attributed to intake of Rhodiola rosea, and these effects include improvements in mental and physical performance. The ability of Rhodiola rosea to provide benefits to consumers, likely stems from its ability to alter brain neurochemistry and decrease the perception of stress. In this regard, a number of studies have investigated the effects of Rhodiola rosea on exercise performance. In one such study, researchers administered 200 mg of Rhodiola rosea extract to human subjects and exposed them to exercise. The Rhodiola extract was significantly beneficial at increasing the time to exhaustion of the subject from 16.8 minutes to 17.2 minutes. Peak oxygen consumption also increased in the subjects consuming the Rhodiola rosea extract. These results suggest that Rhodiola rosea may be an effective ergogenic aid and may have beneficial effects at improving endurance in healthy individuals. 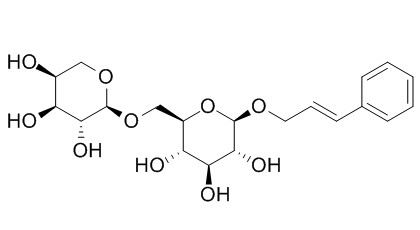 Rhodiola extracts should be standardised to around 3 % rosavin and 1 % salidroside content. These phytochemicals may be responsible for the beneficial effects of the herb. Image shows the chemical structure of rosavin.

Robert Barrington is a writer, nutritionist, lecturer and philosopher.
View all posts by Robert Barrington →
This entry was posted in Exercise, Rhodiola rosea (roseroot). Bookmark the permalink.