Metabolic Syndrome: The Common Link Between Diabetes and Cardiovascular Disease?

Posted on November 24, 2015 by Robert Barrington

The metabolic syndrome is a cluster of metabolic dysfunctions that centre on the development of insulin resistance. Insulin resistance, is a condition that occurs when the hormone insulin no longer is able to elicit cellular effects efficiently. As a result blood glucose levels rise because less glucose is shuttled into the cells from the blood, and this causes the release of excess insulin as a compensatory mechanism. The high levels of fasting insulin and blood glucose are therefore characteristic of the development of insulin resistance. Secondary to these changes a number of metabolic pathways become altered, including the lipoprotein and lipid pathways within the liver. The common aetiology of diabetes and cardiovascular disease is increasingly being suspected to involve the development of metabolic syndrome, and the reality of this association may be that the metabolic syndrome, diabetes and cardiovascular disease all originate from the same biochemical point. This point is likely the generation of oxidative stress.

That oxidative stress is a causative agent in disease is not a new idea. It was Denham Harman who first popularised the idea that free radicals and oxidative stress may be involved in the aetiology of disease and integral to the ageing process. However the possible role of oxidative stress in the development of metabolic syndrome in direct association with cardiovascular disease and diabetes, throws new light on the aetiology of these diseases. It has been suggested that overnutrition, which can be defined as a surplus of energy present in the cell, is able to generate free radicals1. Mechanistically, both glucose and free fatty acids in surplus to the requirements in the cell, cause a phenomenon called cellular overload. This results in the production of high amounts of acetyl CoA from the citric acid cycle and this in turn causes the generation of excessive amounts of electron donors such as NADH and FADH. These electron donors inhibit the flux down the electron transport chain, and this generates superoxide radicals.

Cellular overnutrition then might therefore be a causative agent in free radical generation in the cell, something that would eventually deplete the antioxidant defences of the cell. At this point, the oxidative stress within the cell would lead to a number of changes depending in the cell type. In endothelial cell, endothelial dysfunction may develop. Evidence suggests that oxidative stress is able to inhibit the enzyme nitric oxide synthase, and this in turn depletes the cell of nitric oxide, which is required for endothelial dilation. In beta cells of the pancreas the oxidative stress decreases the release of insulin. The beta cells of the pancreas may be affected more than other cells due to their lower levels of endogenous antioxidants. In muscle and liver cells, the oxidative stress induces insulin resistance, because the overnutrition experienced by the cell, inhibits the transport of GLUT4 transporters to the cell surface, decreasing glucose uptake. This may be a counterregulatory mechanism to limit further oxidative stress (figure 1). 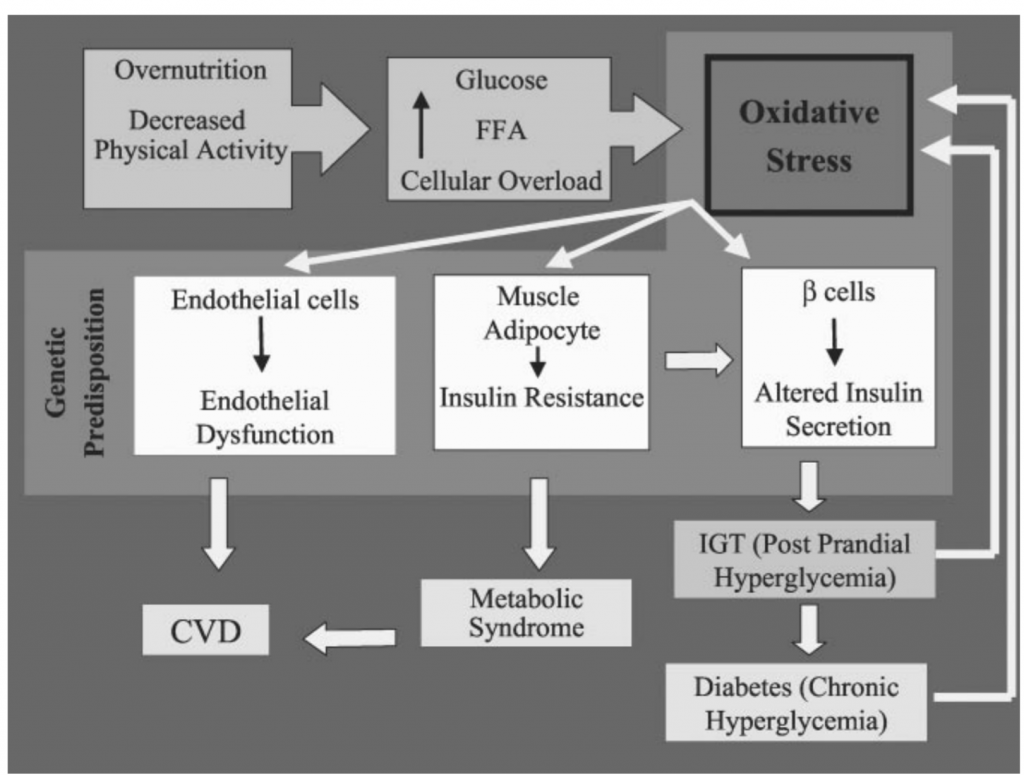