Is Calorie Restriction and Exercise Effective Against Obesity?

Research1 published in the American Journal of Clinical Nutrition investigated the effects of a calorie restricted diet, exercise or a combination of both in mildly obese (body mass index of 27-35 kg/m2) middle aged men and women in a randomised longitudinal study. Exercise intervention was supervised for 6 months of the study after which exercise equipment was given to the subject to take home for the remaining 6 months. Intensive nutritional classes were also supervised for the first 6 months of the study, were the subjects were taught to follow a lower calorie, healthy heart diet. By 6 months the women in the diet plus exercise group had a significant loss of body weight compared to the diet or exercise groups, and by 9 months a similar result could be seen for men (figure 1). In addition, at 6 months reductions in leptin levels were seen in both men and women.

However, by 12 months there were no significant difference between the groups, and more importantly, there was no overall improvements in bodyweight from baseline. These results support the contention that in obese subjects long-term weight loss is not possible by decreasing energy intake or increasing energy expenditure in free-living conditions. This is likely because the cause of the obesity is a metabolic dysfunction that is not able to be correctly by changes to the energy balance. While under supervision in this study the subjects were able to lose body weight with a combination of calorie restriction and exercise. However, as soon as supervision was withdrawn, the subjects reverted to their baseline anthropometric measurements.  Decreasing energy intake and increasing energy expenditure to create a negative energy balance is therefore only successful for weight loss in the short-term because it does not address the cause of the obesity which remains after intervention is withdrawn. 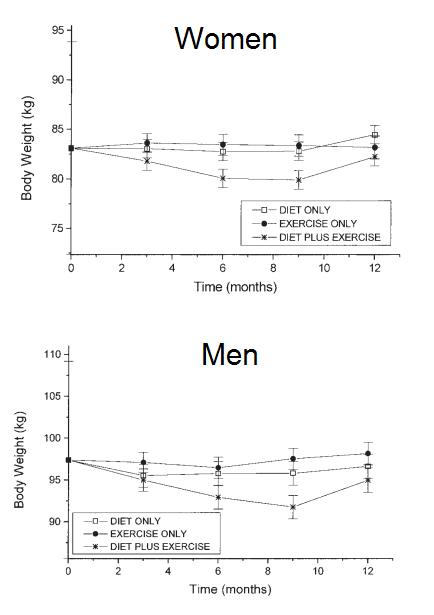 Figure 1. The effects of diet, diet plus exercise and exercise on the body weight of obese subjects1.