Posted on October 24, 2018 by Robert Barrington

Caffeine is able to activate noradrenaline release through the activation of noradrenergic neurones. This may in turn then have a modulating effect on the synthesis and release of dopamine. Caffeine can therefore elevate levels of a number of excitatory neurotransmitters and one of the consequences of this may be an increase in the symptoms of anxiety is susceptible individuals. Another consequence of the release of excitatory neurotransmitters such as noradrenaline and dopamine is a disruption to the sleep patterns of the individual. Disrupted sleep may significantly exacerbate the anxiety induced by caffeine in sensitive individuals. Green tea contains caffeine and other methylxanthines, and it might be assumed that drinking green tea would therefore induce anxiety. However, evidence to date suggests that drinking green tea is associated with a calming effect. One of the possible reasons for this apparent paradox is the presence of compounds within green tea that belong to the flavan-3-ol group of flavonoids. 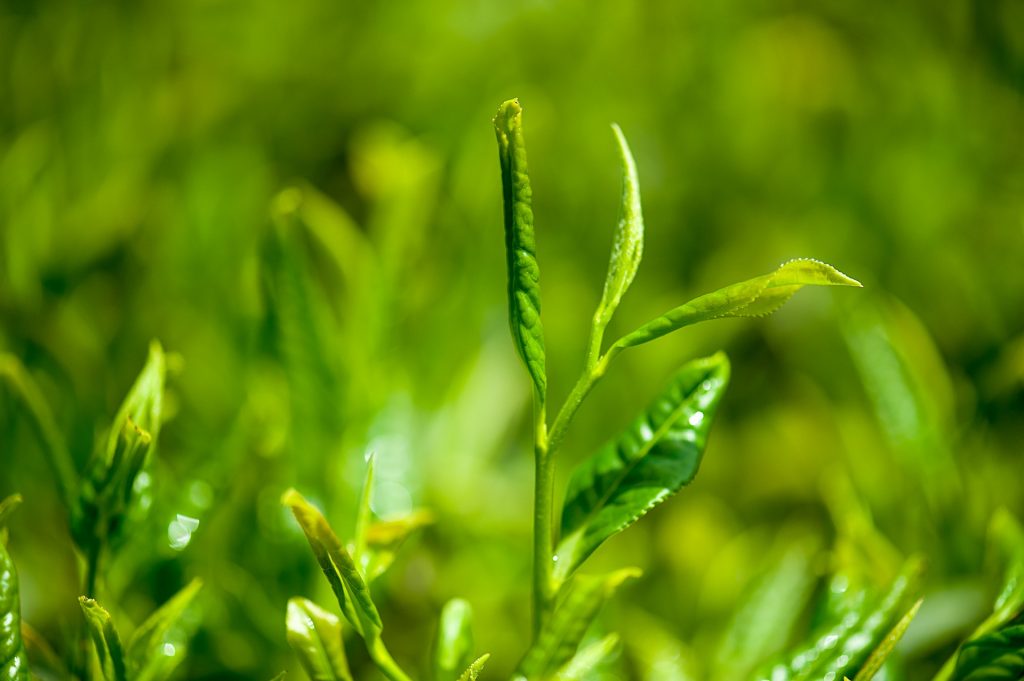 Epigallocatechin gallate (EGCG) is the predominatory catechin in green tea (Camellia sinensis; pictured). Evidence suggests that somewhere around 50 % of the total polyphenols in tea may be EGCG. The other polyphenols in tea may also have anxiolytic effects. However, as EGCG is the most predominate polyphenol, it is likely that the anxiolytic effects of the polyphenols in tea are conferred through the activity of EGCG. Some evidence suggests that EGCG has a down regulatory effect on dopamine activity in particular parts of the brain, and may confer some of these effects through the release of GABA after interaction with between EGCG and the benzodiazepine receptor. The release of GABA has a calming effect because GABA inhibits excitatory neurons (such as noradrenergic and dopaminergic neurones), producing a general calming effect in the brain.

In particular, the flavan-3-ol epigallocatechin gallate (EGCG) has been shown to possess significant anxiolytic effects and may be able to counteract the anxiogenic effects of the caffeine. For example, in one study researchers administered caffeine to mice in order to induce anxiety. The caffeine caused their behaviour to change in maize tests, suggesting they had become more anxious. However, when the mice were administered EGCG, the anxiogenic effects of the caffeine were attenuated. The authors also showed that administration of caffeine to the mice was associated with changes to the brain wave pattern that was characteristic of anxiety, but that administration of EGCG was able to reverse this effect. Therefore EGCG may have significant anxiolytic effects in the mice as demonstrated by both behavioural changes and in changes to brain function. The presence of EGCG in green tea may therefore explain the calming effects of the drink, and suggests that decaffeinated green tea may have even greater anxiolytic effects.