The exact roles of some micronutrients in human nutrition are not fully understood, and as a result controversy surrounds their requirement for optimal health. One such mineral is chromium, which is involved in the metabolism of glucose, lipids and nucleic acids. Evidence suggests that chromium intakes are falling due to a combination of soil depletion and food processing. Deficiency of chromium leads to symptoms very similar to type 2 diabetes, and this has lead some authors to speculate that type 2 diabetes is partly or wholly the result of a chromium deficiency. Evidence published in the scientific literature, suggests that chromium intakes in many populations is too low1. While no immediately obvious clinical symptoms are present in many of these supposed healthy individuals, there is good reason to suspect that over time these individuals could be at increased rick of developing type 2 diabetes.

Research1 published in the American Journal of Clinical Nutrition has investigated the chromium intakes of 22 women and 10 men aged 25 to 65 years in the United States. Over 7 days, subjects were instructed to collect duplicate samples of all food eaten, which were subsequently analysed for their chromium content using atomic absorption spectroscopy. These results were checked against food composition tables to verify the results. Urine samples were also taken and analysed for chromium. The results showed that more than 90% of daily chromium intakes were below the recommended intake of 50µg. The mean daily intake for men was 33µg and for the women was 25µg. The chromium intake per 1000 calories was 14µg for men and 16µg for women. This suggests that more than 3000 calories would be required to attain the recommended 50µg chromium intake.

Foods that were high in potassium, total fat, saturated fat and sodium, also tended to be highest in chromium. Other nutrients associated with chromium intakes were oleic acid, phosphorus, vitamin B6, copper, protein and total carbohydrate. Other authors have also reported associations between copper and chromium intakes. The mean 7-day chromium excretion rate was 0.19µg/d. The absorption of chromium was calculated from the excreted chromium divided by the total dietary intake multiplied by 100. Using this method, chromium absorption was found to be proportional to the intake, such that at 10µg intakes the absorption was around ≈2%, but at 40 µg the absorption dropped to ≈0.5%. Care was taken in this study to ensure that chromium did not contaminate the homogenised food during preparation. This is important because chromium can leach out of steel blender blades and steel containers and contaminate samples before analysis. 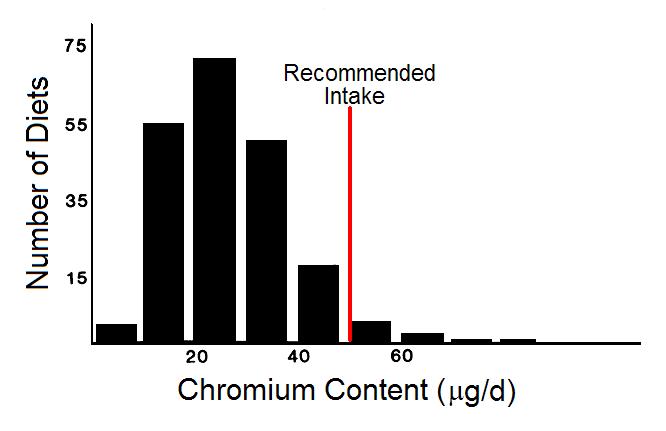